Completion, progress and another meowth to feed.

I've been busy trying to get some pieces together for Con on the Cob. Here is a sampling of some of my latest work. If you get a chance to pop up to Ohio to attend Con on the Cob, be sure to track down Brian and myself. We'll have art on display in the artist alley. I promise we don't bite.

I finished that Chanticleer piece. Pretty pleased with how it came out: 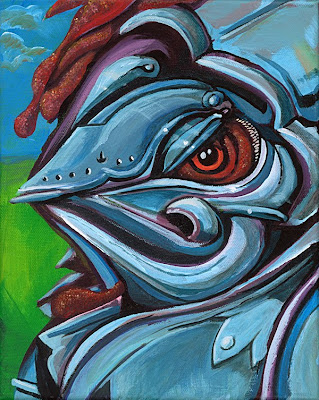 I also completed a Harpy, at the urging of my friend Stace, who thought it was a shame that none of my work had boobies. Enjoy!

On to the work in progress. Well, I've had a piece sitting on my easel for over a year now. It's a gessoed masonite board, 12" wide x 36" tall. Very tall and skinny. I laid down some initial background shapes in acrylic, then completed the rest in oils. You can paint oil over acrylic, just never vice versa ;)

I want the piece to be something of a sequel to my Grave Robbers (oil and kitty litter on canvas), below: 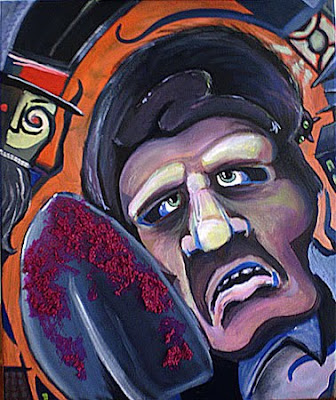 So, I got the acrylic tones in and a little bit of oil, then the poor thing sat neglected forever. I think my problem is that I'm used to working in acrylic and as a result, I'm spoiled by the quick drying time. Oils take sooooo long to dry, and I can only work for so long before everything gets muddy. Eventually, I set the painting aside to let it dry, then never get back to it.

Here's the poor painting, sitting dejectedly in my studio. It's that tall pink vagina-shaped monstrosity nestled beneath the stand-up easel in the corner. 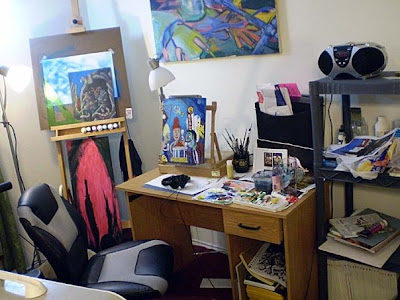 Several weeks ago, I took it out and dabbled a bit. The idea has always been to have the Grave Robbers being confronted by a spectral, translucent detective. I made a bit of progress on the figures and the surrounding caves. Then it sat again.

Well, I finally got the notion to work on it a bit more today, with further fleshing of the Robbers (and their cat), and the initial stages of the ghost. For obvious reasons, I'll have to wait until the Robbers are fully resolved before I can add the trench-coated shoulder and raised .45 automatic of the ghostly detective. You'll be able to see the other figures through his non-corporeal shoulder. 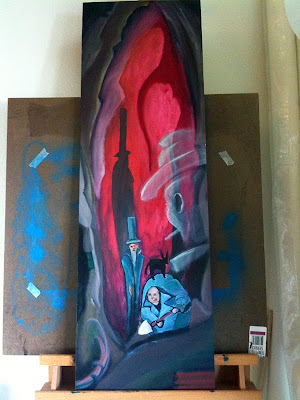 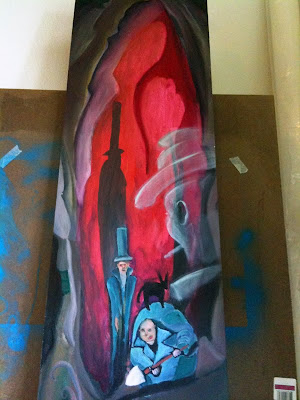 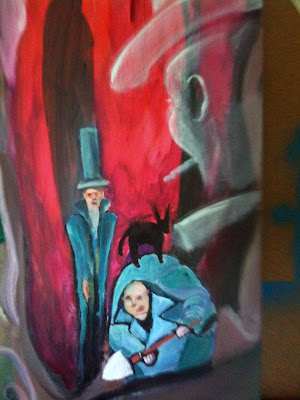 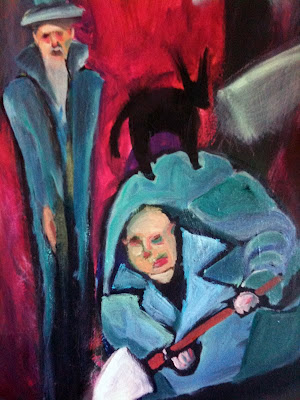 Things started to get a little muddy, so I decided to call it a day and took a few pictures to share. However, in reviewing them, I just hated the tall skinny guy in the top hat. He looked like some half-assed Gandalf, and his posture was uninteresting and stiff.

Stepping away from the painting, indeed viewing the pics on the small screen of my iPhone, drove it home. He needed a complete do-over. So, I went back to the easel and picked up the brush in order to make him a little more crooked. No matter that his shadow would no longer match - Maybe he's got some Bram Stoker's Dracula action going on. As they say, "Kill your darlings". So, I killed him. I was instantly satisfied, as a more dynamic shape took form. The new crooked form fit well into the compositional space of the figures. For now, he's just a black shape: 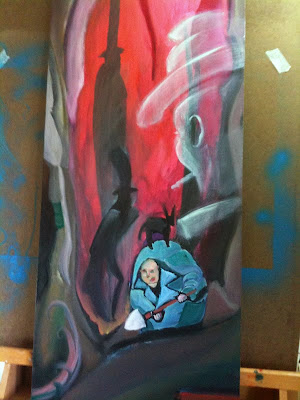 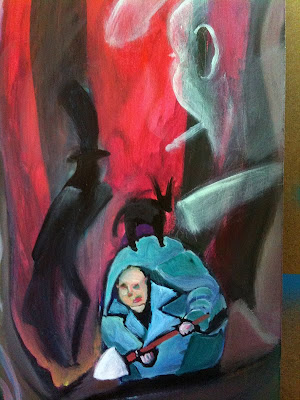 Love it! So long, Gandalf!

But wait... now the shape looks like an awesome anthropomorphic crow! If I gave him a black beak that pointed toward the cat's ears, and worked on some feathers...

So, that will be the next step. Materialize the crow-man and make the tall, mismatched shadow INTO the 2nd Robber, complete with top hat, curly beard and whacked-out eyes. Those features will definitely help bring the eye up to the otherwise neglected top half of the painting.

I'll post the results as soon as they happen. For now, it's the "let it dry" game. But with Con on the Cob a mere 3 weeks away, I don't have the luxury of sitting on it this time.

Finally, I've added a new "helper" to the household. My coworkers found a poor little stray kitten and brought him to me because they know I'm a sucker. Here he is, doing routine maintenance on my WACOM tablet. Damn, is he cute or what? 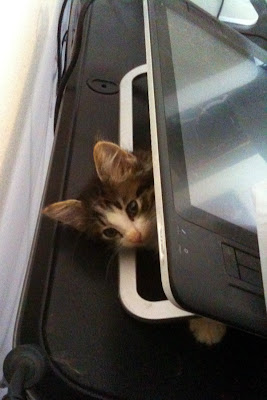 "Chewy! Hand me the pixel spanner!"