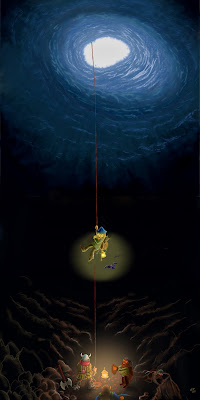 Completed part three today.
Pubo climbs down the rope about 100 feet onto
a rock ledge littered with rubble. The other party members
await him there. The only way on appears to be another shaft
downwards. There is nothing of interest here save rubble, a few disturbed bats, and
bat droppings, so the party must continue downwards. 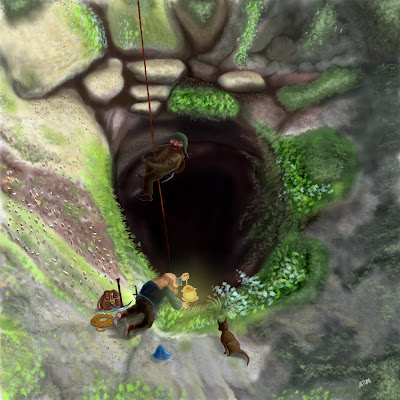 The Flintwork Clan
I have decided to catalogue the adventures of the down at heel, sundered group of petty Dwarves known as "The Flintwork Clan". Out of work since their small flint mine closed, the family has been looking for other outlets to earn a living.
So far I have worked out that the clan is called Flintwork, their flint mine has closed, they are a poor, smelly and down at heel lot, rather like petty Dwarves. Their leader is Pubo "Pumpkinhead" Flintwork (owing to his overtly large head) Then there is Gizzard, Mooji the Cat (a polymorphed Dwarf Thief), Pauli Swordbreaker, (the resident bad-ass Dwarf champion), and the two drunken "grogbreath" cousins. (one is called "Grog" the other "BBreath" or bad breath..."grogbreath" as a pair) Together they make up the fighting, adventuring and mining force of the rather small sundered Flintwork Clan. Known affectionately as the Flintwork Force! My first illo will depict the clan, and especially these principle chaacters. The second illo (which I finished today) depicts the team about to enter and survey a cave system located about two days journey from their home.